Egg Nog isn’t something that I grew up drinking around the holidays, so as an adult I really wanted to try it out because it’s something I always hear people talking about!  I’ve gathered that the people that drink it, love it and the people that don’t drink egg nog, hate it.  I actually liked it.  It’s so creamy and very vanilla.  It’s like vanilla custard with a hint of spice.  Of course, my mind immediately went straight to how amazing this would be as a cupcake! 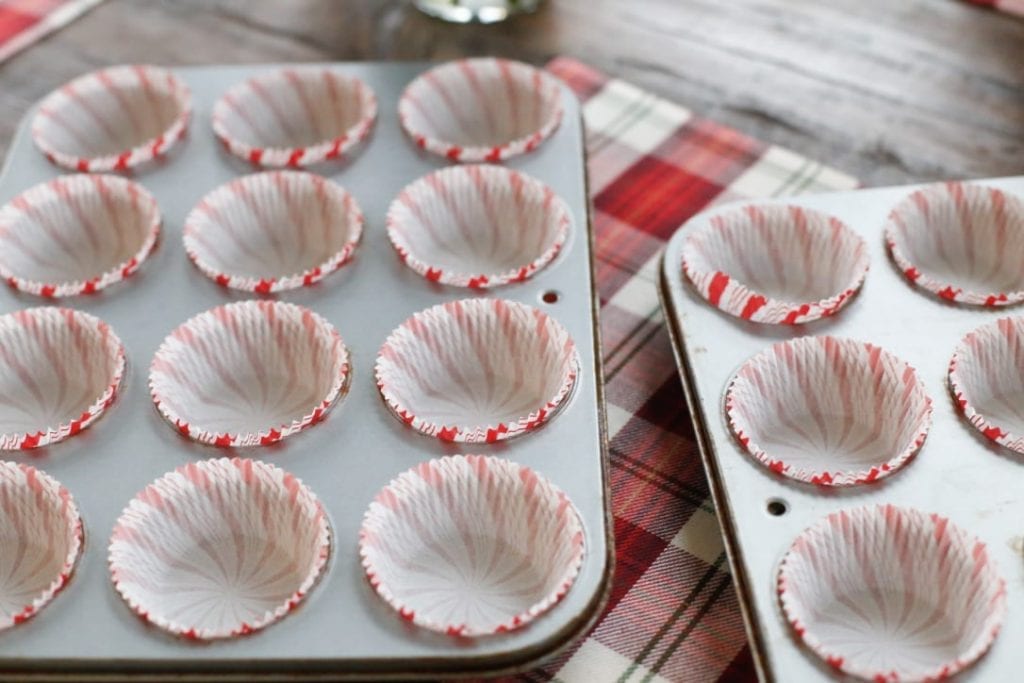 Preheat your oven to 350 degrees.  Line your muffin tins with liners.  I found these adorable candy cane paper liners and thought they would pair perfectly with how I was planning on Decorating them. 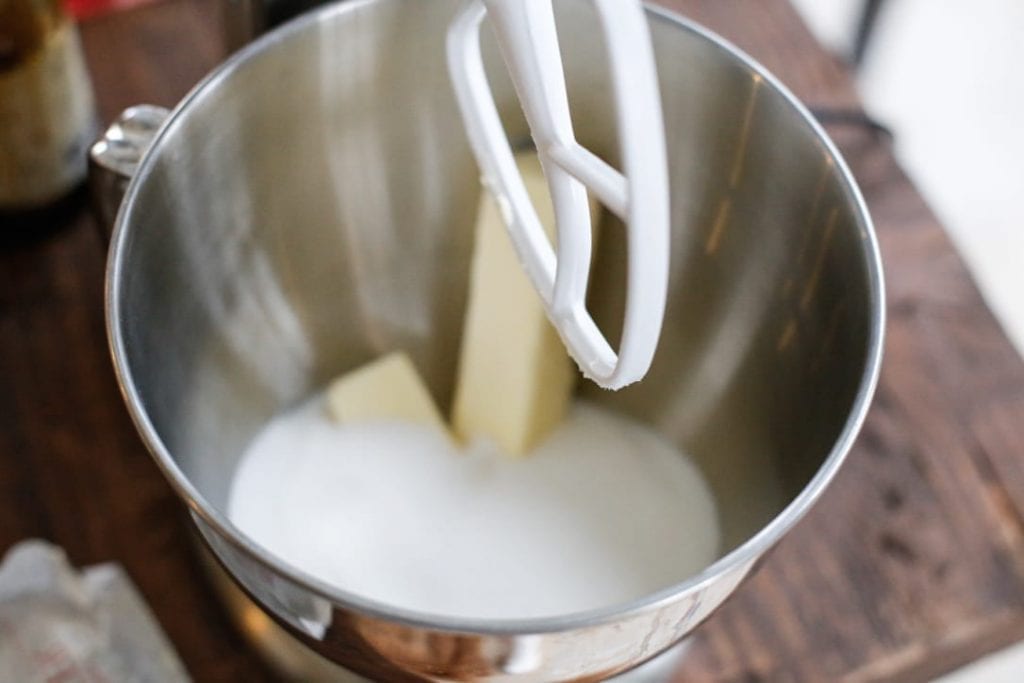 Using your mixer, cream the sugar,vanill, and butter together until pale yellow and fluffy like below. (This Kitchen Aid mixer is currently on sale!) 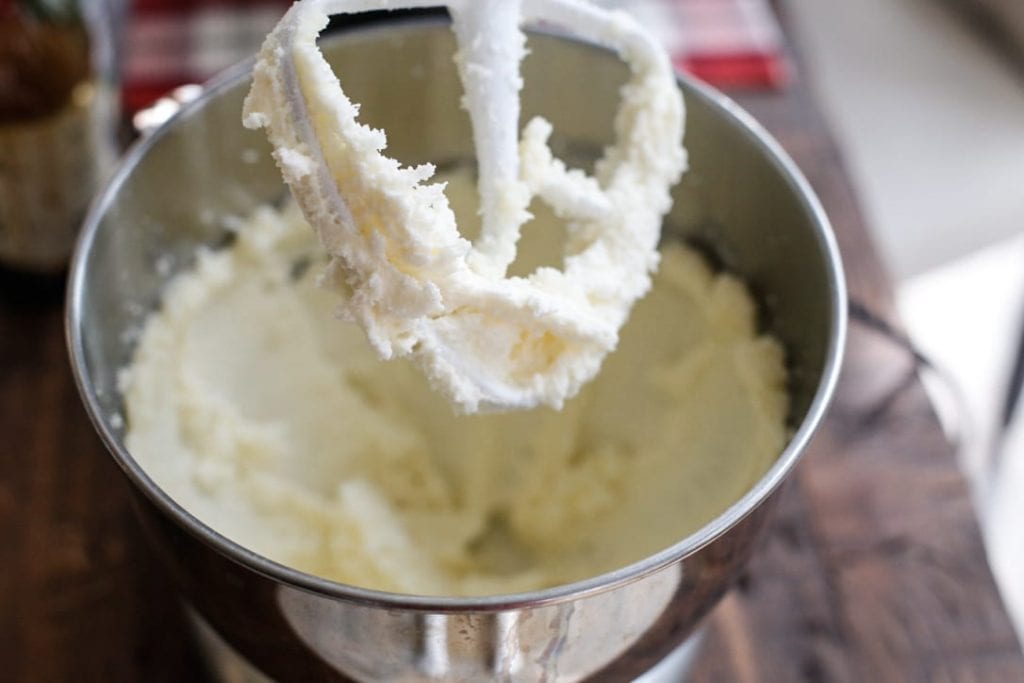 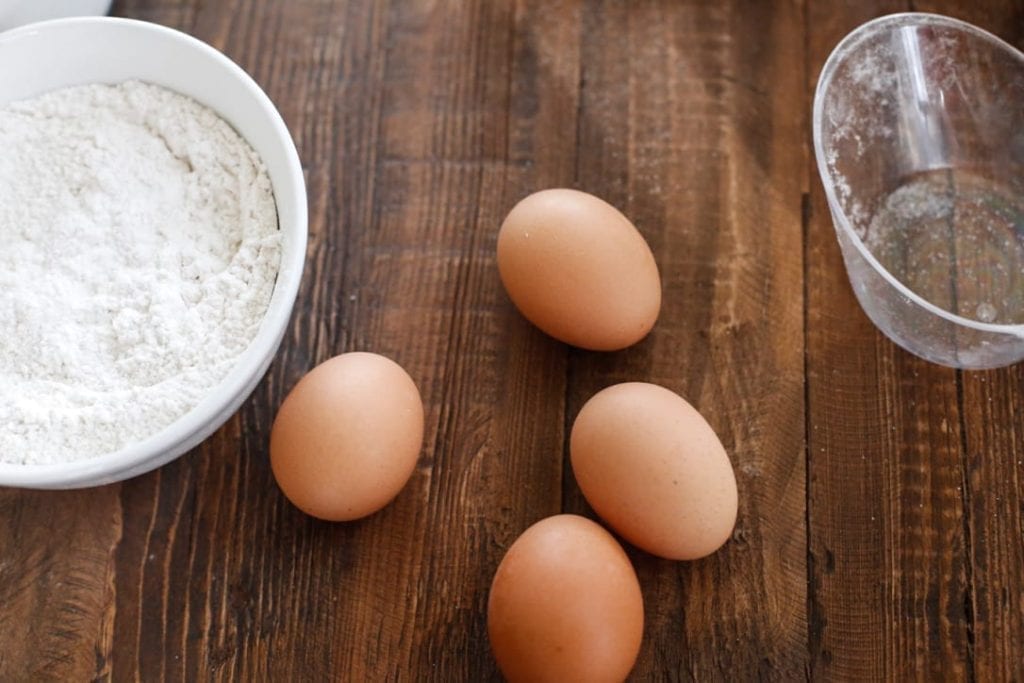 In a separate mixing bowl, combine flour, salt, and baking powder.  Add eggs one at a time into the sugar and butter mixture. 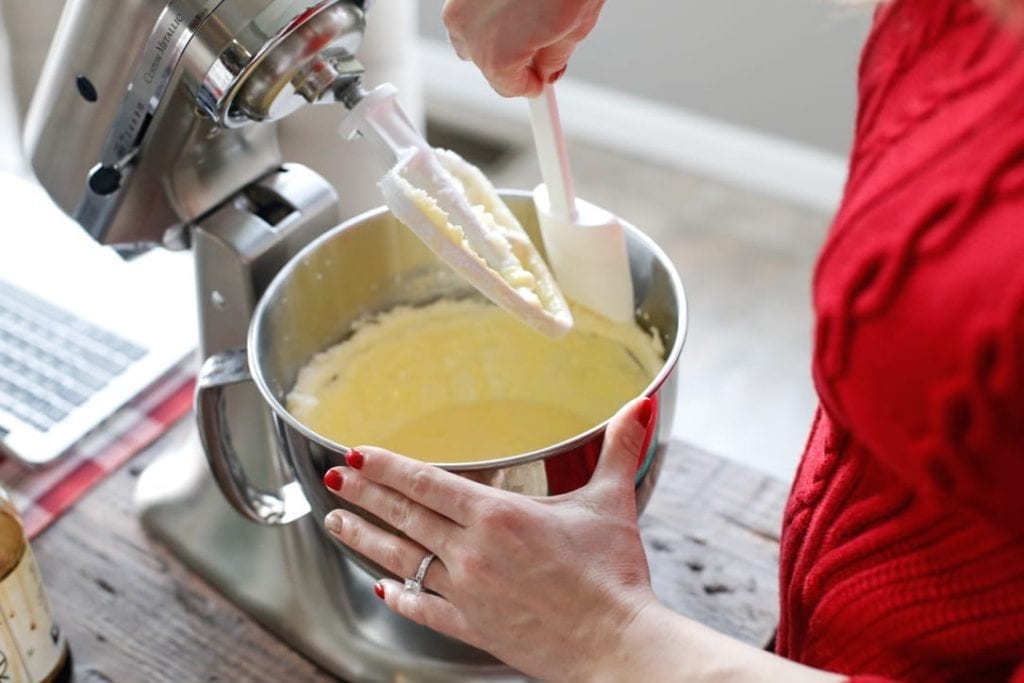 By this point, I always have to scrape the sides down and mix a few stirs witha  spatuala to make sure you aren’t left with a clump of butter and sugar… as delicious as that sounds, it’s not good in cupcakes. 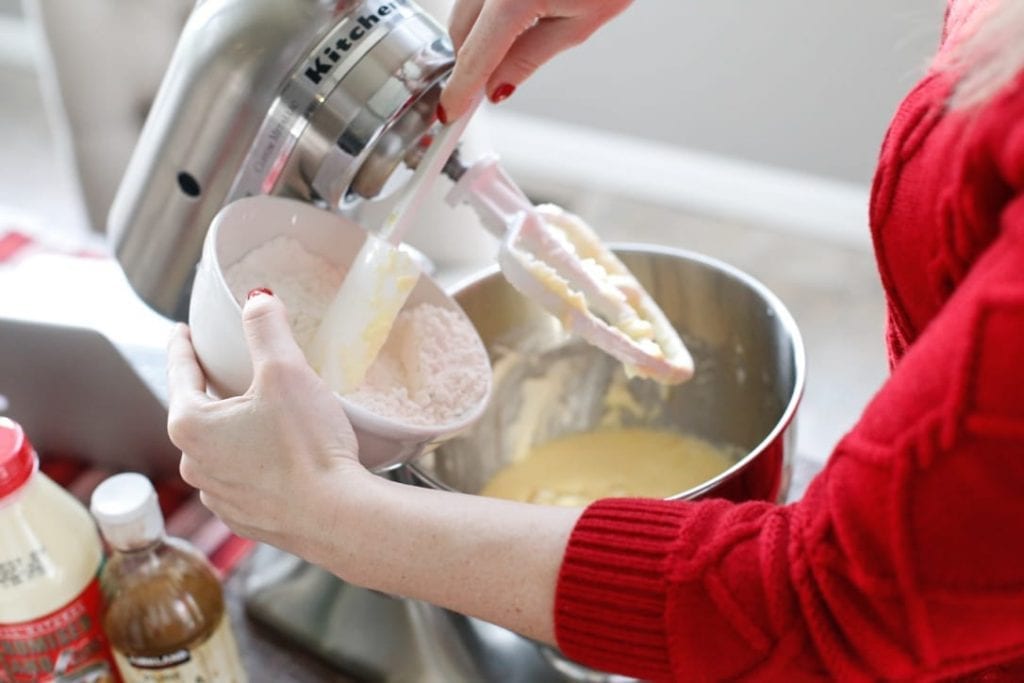 Alternated adding the flour mixture and the egg nog, until fully combined.  I do this step in 1/3 portions of each. 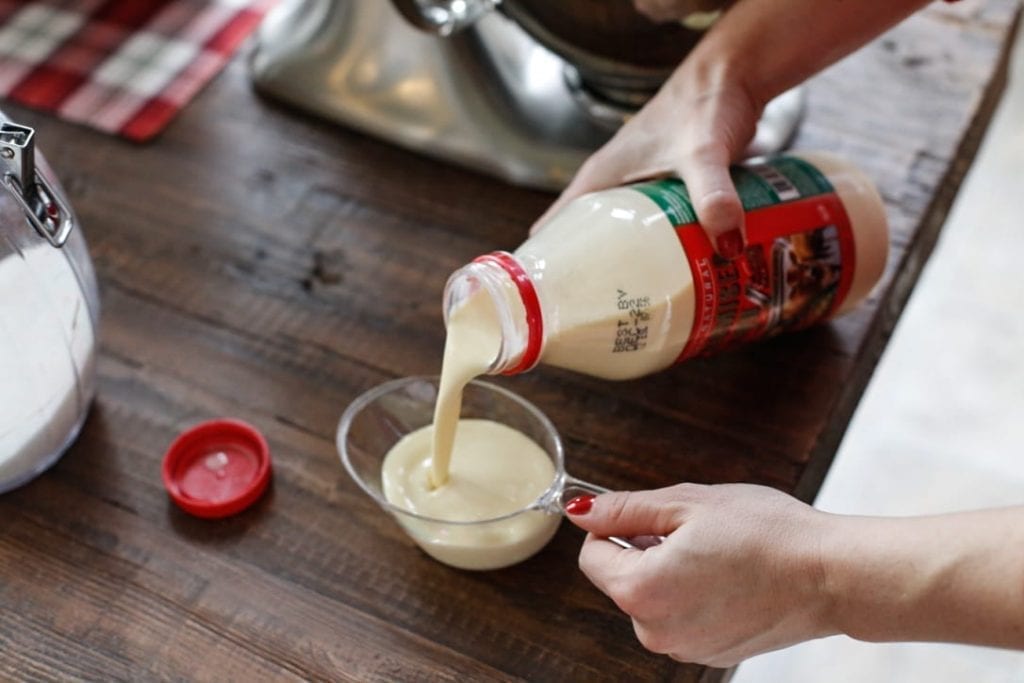 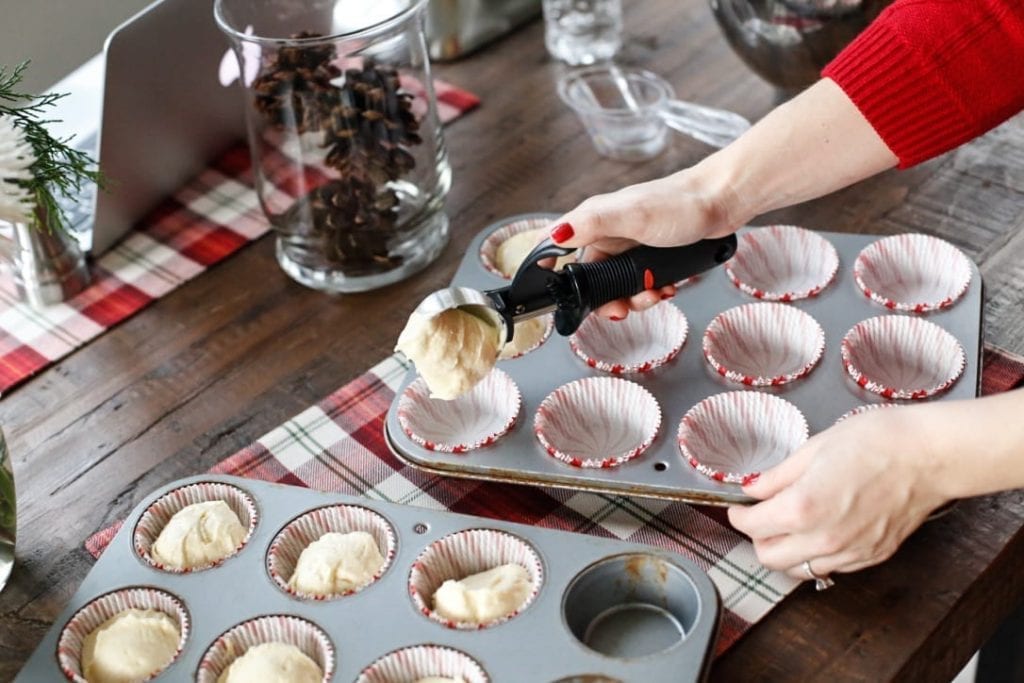 Using an ice cream scoop, fill each line 3/4 of the way full. 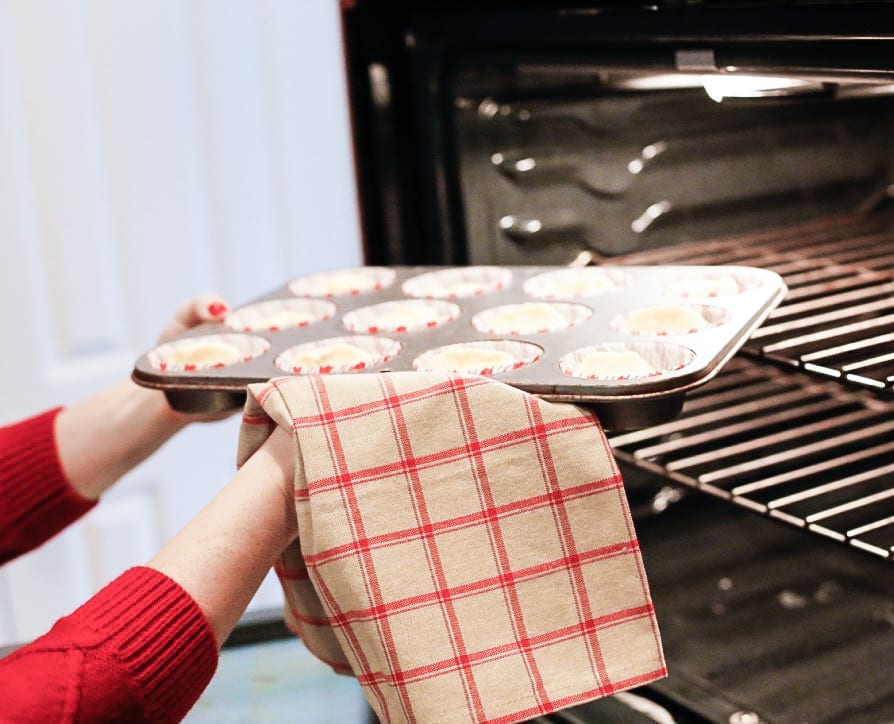 Bake in the oven at 350 degrees for 13-15 minutes or until you can insert a cake tester and none of the batter sticks. 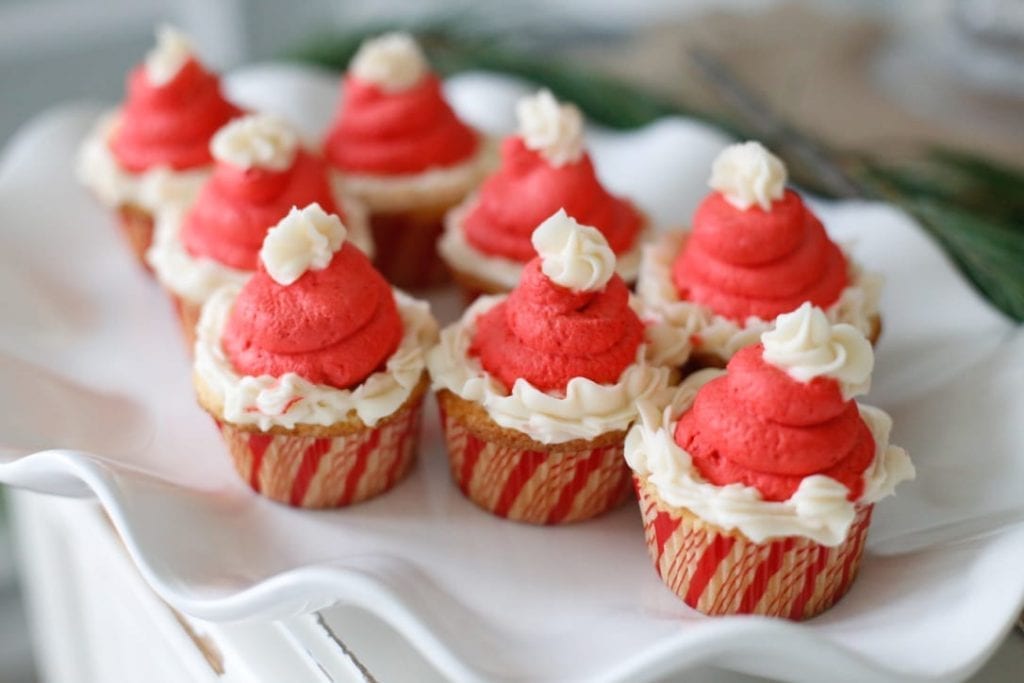 I thought I was on a roll with pictures throughout the process of this cupcake making, but I totally forgot to do them for the frosting!  I’ll just put the steps below!  I thought it would be cute to make these cupcakes look like little Santa hats for the season!

Cream the butter, vanilla, sugar until light and fluffy.  Add the eggs one at a time until combined.   In a separate bowl combine the dry ingredients: baking powder, salt, flour, and cinnamon.  Alternate by adding the flour mixture  and egg not mixture until everything is incorporated and combined.  Using an ice cream scoop,  fill the cupcake liners 3/4 way full.  Bake at 350 degree for 13-15 minutes.

Using the whisk attachment, whisk the heavy cream, rum, sugar, and vanilla until stiff peaks form.  Scoop out about 1 cup of the frosting to use for the fluff on the santa hat.  Add red food coloring to the remainder of the mixture.  Pipe on the cupcake in a swirl to make it look like the hat.  Using the mixture that didn’t have food coloring, create the fluffy rim outside of the hat and the top.  Enjoy!