TGIF ya’ll!  How excited are you for the weekend?! Is it me or did this week literally fly by?  I mean, in a wink it was Friday for me.  For the record, that is not a complaint either.  I know the month of June is going to be extra busy for me so I thought I would get a jump on the cupcake of the month, which is a chocolate cupcake.  YUM!  The other reason for this is because I cannot stop thinking about the chocolate cupcakes with nutella and whipped frosting from Alaina’s bridal shower this past weekend.  I know I’ve said this many times before, I’m honestly not a chocoholic so for me to be thinking about chocolate days later- that tells you how good they were!

The inspiration and part of the recipe came straight from one of my Food Network favorites, Rhee Drummond, The Pioneer Woman.  She made this decadent chocolate cake and who could resist it?  Just take a look at it!

I’m essentially turning this beauty into a cupcake.  Why not?  The outcome was pure perfection. 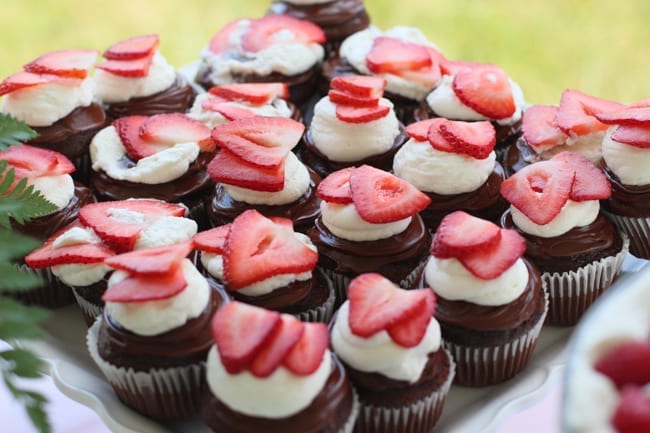 Cupcakes: (Recipe from the Pioneer Woman)

In a medium saucepan, melt the butter. Add the cocoa and stir it until smooth. Pour in the boiling water, let the mixture bubble up for 20 seconds or so, then turn it off and set it aside.

In a measuring pitcher or bowl, mix together the buttermilk, baking soda, eggs, and vanilla. Set aside.

Pour the batter into the pans and bake them for 12-15 minutes, until they’re just set. Remove them from the pans and set them aside to cool completely.

Smear nutella over the top of each cupcake.  Add a heaping dollop of frosting.  Top with sliced strawberries.